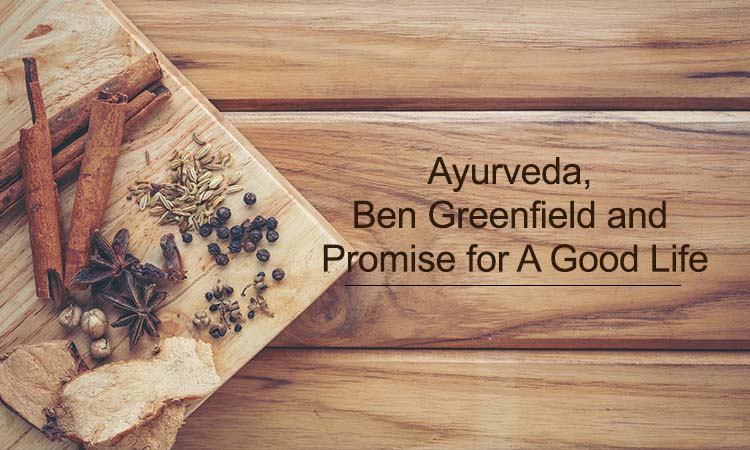 Ayurveda has been long looked upon as that great ancient science which have paced the way to usher goodness  for ones’ skin and hair, lifestyle and everything else in tandem. It has not only garnered the trust of several medical professionals looking for an alternate way to healing, but also a promise to offer a better living experience for one and all. India has been a hub of Ayurveda for over ages , dating back to a time when saints and hermits relied on the power of plants and trees to cure diseases  for good. American author and bio hacking pioneer Ben Greenfield has penned a book called “Boundless” that harps on the essence of Ayurveda and reveals multiple exercise strategies, diet and meditation techniques and much more.

According to Ben, one and all individuals deserve to carry as much energy as possible to carry on with their daily work and more. However, that is not always the case and one can’t be possibly sure what the underlying reasons are. Reportedly, Greenfield made Ayurveda his rock bed of research for his new book across a dozen of them that form a part of his personal library. Ben’s book is titled, “Boundless: Upgrade Your Brain, Optimize Your Body and Defy Aging”. In essence, his book mainly focuses on ways and tools that human beings can make use of across categories like, diet, meditation, gut digestion and enhancement of sleep. In his words, “There isn’t one takeaway necessarily because everyone has different needs. Some people sleep well and some poorly, some have good gut function but do not know proper exercise. There’s no single focus which is perfect for everyone. But the most important thing would be to fight against evolutionary mismatches. We are bombarded by pollution and the amount of impurities in the food that is grown now. Most of it is completely opposite to how people lived centuries ago. Whether via modern scientific or ancestral strategies, we should attempt to stimulate a more natural lifestyle,” said Greenfield, the 39 year old writer.

Talking about the Indian influences impacting his work, Greenfield commented that Ayurvedic practises and Ayurvedic products have always delighted him and formed his core of interest. He further added saying that, “These are simple strategies, with many of them included in my book –things like waking up in the morning and doing tongue scraping and oil pulling, focusing on herbs, spices and digestives before and after a meal, detoxification strategies like dry skin brushing, yoga flow poses and breathing exercises.” Using Ayurvedic Body Oil to treat issues like dry skin is also highly recommended.

Furthermore, Greenfield also laid stress how Ayurveda carry a lot of wisdom that one can effectively use to impact and enhance their lives for good. It is increasingly important when one considers integral topics like genetics and ancestry in tandem. Greenfield opines, “In India, the way that people have eaten, moved, lived for years is still deeply rooted in their DNA. If someone was to come to me seeking for physicians to work with, I would instantly recommend someone well-versed in Ayurvedic medicine.” He also laid great emphasis on decoding quite a handful of myths like a person snacking all day to help elevate their metabolism, when its actually better for the body to give rest to the system between meals. Also, contrary to what many people believe, going to the gym and working out is not at all a way to be superiorly fit and is only partial truth.

In his new book, Greenfield puts stress on ‘micro workouts” which are highly beneficial for one to stay fit without the need to visit a gym. Often high amount of fat accumulated in the body is the chief underlying reason leading to cardiovascular diseases. Similarly, high intake of fibre can also lead to diseases like colon cancer for instance. Such propositions are nothing but high end myths. Speaking on the issue of mental health, Greenfield pointed out on thee significance of attaining balance for neurotransmitter chemicals which is used by nervous system to help communicate around the body picking up on signals. The eight introductory chapters of the book give sole focus on cognition as well as mental performance. Additionally, it includes essential care for proper function of brain in order to optimise cognitive function.